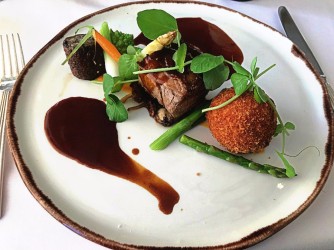 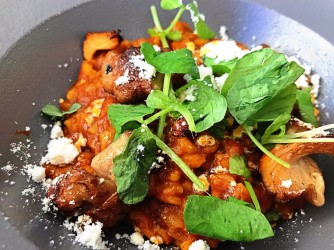 It’s been a a while since I’ve been posting! I’m so sorry about that. I’m back on track and more ready than ever to get going.

I recently ate at a really nice restaurant called Marco Polo and it looked really classic expensive. As most of the classic expensive restaurants the food had fancy names, and the ingredients were as one might expect fancy and not necessarily in a good way. There were only a few dishes one could choose from, For starter I choose  Risotto based on vegetable juice and pan fried shiitake mushrooms, basil oil and truffle snow. The risotto was different than I had imagined, the rice was a little under cooked, but the truffle snow was amazing, and the mushrooms were perfectly done. from a scale on 1-10 I would rate the Risotto a 4. ( mainly because the risotto was under cooked.) Then for main course I had the ballotine vale, with cockerel served with vegetables of the season, pommes croquettes and vale jus of marrow. Some of the vegetables were perfectly cooked. ( there were some vegetables I was allergic too so I won’t count that into my final score.) The vale jus/sauce was really good, perfect in fact. The cockerel was not for me to be honest, it had a consistency like a pudding and it had a nauseating taste, the pommes croquettes was good, and perfectly made. the ballotine vale had a lot of tendons and it was nauseating to it it, and it was nearly impossible to cut it into pieces. But on the other hand, if you managed to cut off the tendons the meat itself was perfectly cooked and tasted amazing. The main course from a scale of 1-10 I would have to give it a 4. The reason it get such a low score is basically that the tendons basically was wrapped around the meat, making it impossible to cut, and nauseating to eat and the cockerel was like a pudding not very good either. But everything else was good and perfect so the score ends on a solid 4. The waiter we had was amazing, he was really good at his job. Telling us what each meal where and what it contained, and he even knew everything there was to know about the beer I was ordering witch was amazing. I loved our waiter he was perfect and he was smiling all the time and was in a really good mood witch is a big plus so if I were to rate the service and the waiter on scale from 1-10 I would have given him 11 if it were possible, so he gets a 10 +.  I will on the other hand maybe try to eat there once again, maybe the menu is better next time.

This site uses Akismet to reduce spam. Learn how your comment data is processed.

I’m 30 y.o and I have a strong passion for cooking. I’m just another girl in the world tying to have fun in life. I wanted to try out WordPress because I love to write and I love to cook so why not combined the two together and blog about it?